Boom is a horizontal aluminum pipe to which bottom edge of big sail is secured. Avoid standing in zone where the boom might be moving. One may receive a strong strike by a boom rapidly shifting on the other board. It’s especially dangerous for head as it is set on the level of head.

Watch your head! Beware of boom, be attentive, and warn other crew members standing in dangerous zone. Boom is especially dangerous when going at broad reach, i.e. down the wind, because in this case spontaneous shift on the other board at warp speed is possible. It moves with such speed that sometimes bends or even breaks striking in backstay. The most frequent reason of serious injures!!!

Mnemonic formula – “Never between gear” and “Never under gear”

3. Boom topping lift (especially if there is no hard vang of boom) – do not pay out boom topping lift if mainsail is made up, because topping lift supports boom in horizontal position. If you pay out the topping lift (open ckeat that holds it) boom will come down like a ton of bricks. You’re lucky if it falls not on someone’s head. Know it and remember!

“Do not open the cleat of topping lift if mainsail is made up!

4. Gloves. Working with sheets (gear) with gloves put on only! Running ropes burn fingers when rubbing. 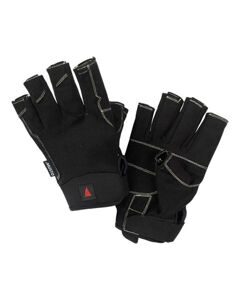 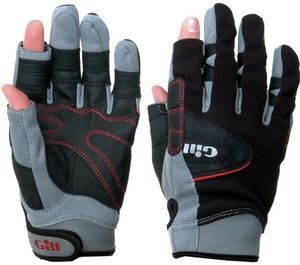 5. Heel – sharp angels and outstanding objects on deck and in cabins – fend off, don’t strike. Frequent reason of injures! 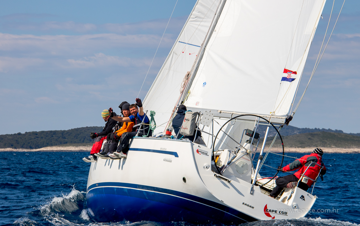 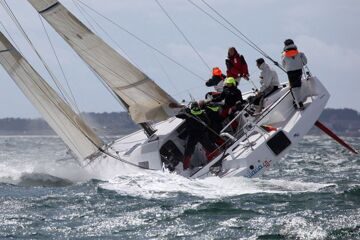 7. Deck may be slippery because of water especially salted – move carefully! Hold on, don’t slip, don’t fall! Ropes and gear on deck and in cockpit are also dangerous in this sense, because stepping on wet rope it is easy to slip. Sail’s canvas is very slippery too – better don’t step on it when working with sails.

8. Rope loops – don’t put in the leg(s) into the loop – it may draw tight if tensioned, pull you or even jerk aboard.

9. Loops when dropping the anchor – the one who steps into the coil or loop of the rope may be pulled aboard and under water.

11. Swimming at sea (not at anchor) don’t quit the yacht all crew at once. Decide beforehand who stays on board! Move down deck ladder in advance. Even if the ladder is down, yacht may be drifted away by the wind, current or waves. There must be at least one crew member on board who will be able to start engine or go under sails to swimming people.  To be on the safe side you may haul down from aft a safety line. Duty man should watch swimming and provide help if needed.

12. Propeller – engine must be now working if somebody is swimming or for some reason in water near the yacht. When rescuing man overboard under power remember that propeller constitutes a threat - switch to neutral or stop engine when someone is approaching aft (back part of yacht).

13. When swimming or rescuing man overboard – do not tow the swimmer secured with a rope at high speed because at certain conditions head wave will not let him breathe and he may splutter.

* know where your life jacket is

* know in advance how it can be activated – automatically when gets in water or you shouls start it manually. In case you have any questions consult with captain.

* be able to put it on and fasten (put on at least once!)

* know where air feeding is and how to use it

* ALWAYS wear life jacket when outside the cabin (on deck and/or in cockpit), at poor weather conditions, i.e. - strong wind more 20-25 knots, wave higher than 1 meter, poor visibility (fog, rain, thunderstorm), at night time and night operations on deck in bad weather when berthed, in heavy clothes or boots, if you handle a yacht alone and if crew is few even at favorable weather conditions.

* in all cases listed above life jacket should be out on in cabin, below UNTIL you come in cockpit or on deck!

* always put on life jacket if commanded by captain

* if you wear harness than you should put on life jacket only on fitted and fastened harness.

* know where YOUR harness is

* match slings and belts your size in advance

* fasten shackle only to standing and robust elements of yacht construction such as standing rigging (forestay, backstay). Never use railings because fire steel wire might not carry a load when man falls overboard! In case there are special safety railing on deck than securing on them will be convenient and robust.

* always wear harness and fasten if commanded by captain.

16. Signals (flares, smoke flares)  - know its location and be able to use it. Launch flares from leeward only for they not to be blown on sail and then on deck! The same is about smoke flares and others – everything from leeward!

17. Life raft – pinion before throwing in water! To open it pull lanyard strongly. Some rafts has two lines – secure both. One of them is safety line the other is lanyard. If the fart is inflated and turned upside down than one crew member should jump in water (secured with lanyard if necessary) and turn the raft in right position. If there is strong wind turn the raft’s top windward, than the wind will be working on you.

21. Be careful with fire! Yacht burns out very quickly and sinks if plastic waste-pipes fused.

Be careful with fire in galley. In case of combustion on frying pan use a fire blanket. You should know where it is, you may ask skipper.

23. Evacuation in case of fire – to evacuate from cabins if way through mess room is blocked with fire you may use big hatches in ceiling. If it’s not available you should cover with blanket, take fire extinguisher, activate it and making way with its stream run up.

24. Galley – be careful with boiling water and hot liquids, especially when heeling and swell! Don’t burn yourself! If scalded yourself pour some cold water on burnt place to lower temperature. When doing it straightaway serious burns may be avoided! During swell and strong heel better not to cook hot soups, tea etc.

25. Seasick – to lower risk of seasickness be on deck, find some job. Look at the horizon. The best place to avoid sea sickness is in cockpit near deck ladder.

27. If you fell OVERBOARD - don’t panic. Breathe in some air. If you didn’t put life jacket and there is ring, jacket or another floating device or these objects were blown away or if it’s difficult for you to swim than get rid of heavy clothes and boots. If you stay afloat easily than don’t take off clothes and

28. When docking, approaching another yacht don’t put arms or legs into gap between yacht and quay. Yacht weights from 10 to 15 tons – it may squash! In order yacht not to run on obstacles put some fenders in the gap

29. Anchor winch – keep your hands away from chain on anchor winch.

30. Mooring – work with mooring in mooring or other closed gloves, because it may be covered with sharp shells that may cut your hands.

Pull mooring with hollow back. Otherwise you may strain back.

31. Rails secure to stanchions with metal rings; theses rings straighten because of tensioned rails and sharp edges may injure hands. Don’t hold on where rails are fitted to stanchions.

32. Covers of kit lockers – be attentive, don’t put hands and fingers because covers may fall and cut finger(s). Watch out! Be attentive!

33. Smoking – leeward only! For ash not to get on yacht or in crew members’ eyes. And smoke too, surely.

* Watch the propeller – stay away from it and don’t approach it to others!

* Always take oars with you! Engine may break.

* Breaking waves may turn upside down – think if it’s possible to go back on yacht from coast before you approach the coast.

* When handing over the engine from one dinghy to another or on yacht secure engine from falling aboard with safe line bended to yacht but NEVER bend it to yourself! If engine falls aboard it will drag you down with it!

* When standing in dinghy be very careful. It is extremely unstable. It would be better if anyone could help you – take your hand from yacht.

* Don’t smoke when fueling! Gasoline inflames in a moment!

* Anchoring from dinghy watch out coil of anchor chain. Don’t get in loops in order anchor not to drag you down the water.